Is the Seattle Real Estate Bubble Going To Burst? 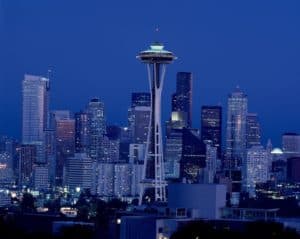 Not anytime soon, according to this Seattle Times article by Mike Rosenburg. Seattle has been the hottest real estate market in the country for a full year, with housing costs growing more than double the national rate. As we all already know, rental prices have also been on the rise—at almost the fastest rate in the country, with the average two-bedroom apartment now over $2,000. According to Rosenburg, this is “pushing more people into the homebuying market.”

But with an average price tag of $725,000 (and rising) for a single-family home, that would mean a household earning the median income of $80,000 would be paying around 50 percent of their monthly income toward their mortgage.

Fortunately, the initial surge of rental rates seems to have slowed down a bit. But it's impossible to talk about housing costs without also discussing the homelessness issue, which was declared a "state of emergency" two years ago, with little being done so far to fix it. So it will be interesting to see what effect a continued "hot" housing market, the election of a new mayor, and ramp-up of efforts by the City Council will have on future rental affordability, job wages, and the homelessness crisis.